Unknown Knowns: How the Bush Administration Traded Failure for Success in Iraq

By David Cortright, George A. Lopez, and Alistair Millar

This study by the Fourth Freedom Forum’s New Paradigm Project examines the alternative security approaches that were available at the time of the U.S. invasion of Iraq in 2002, and examines alternatives to document that the war was unnecessary and to highlight the policy advantages of multilateral nonmilitary security strategies. 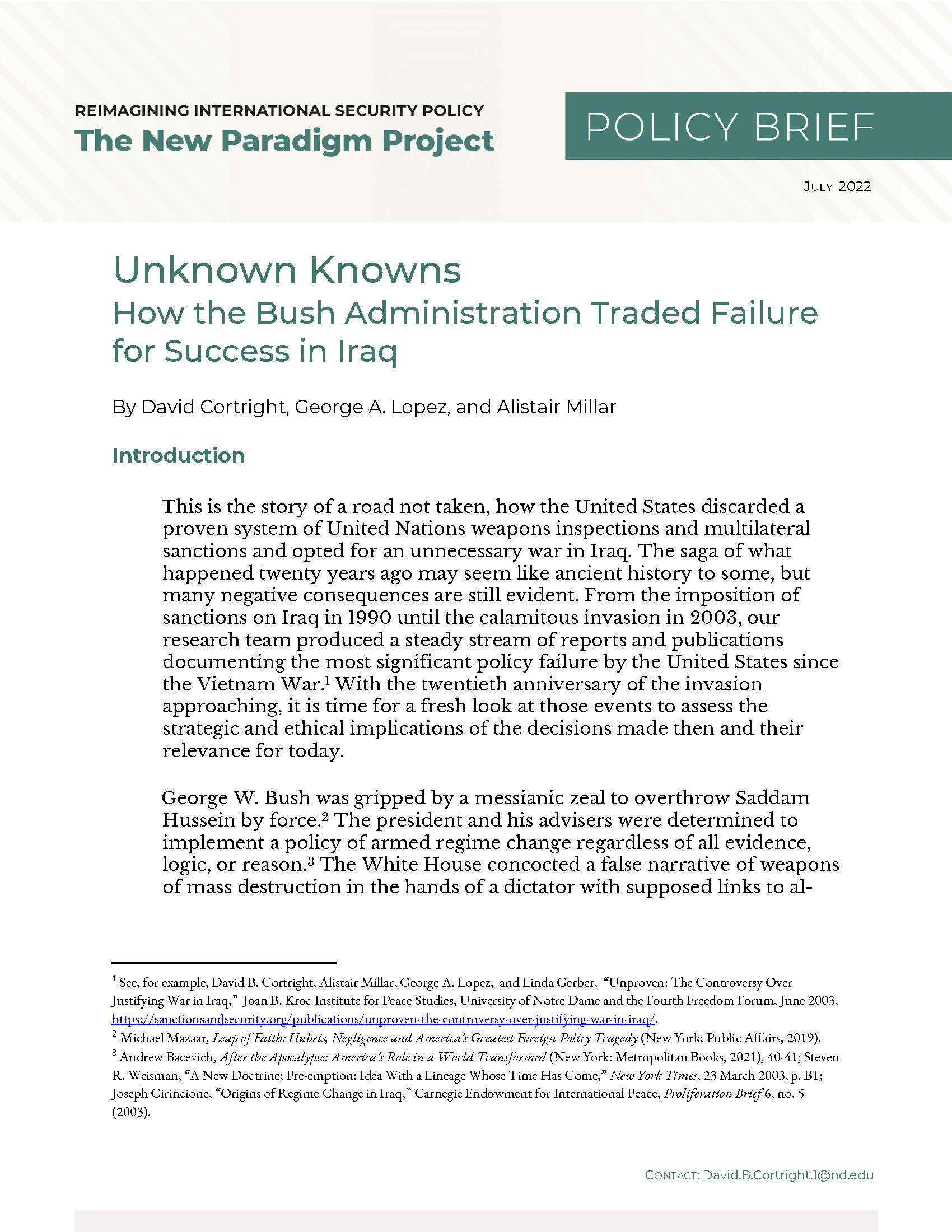 The Smarter U.S. Option: A Full Summit with Iran Policy Brief No. 11

By George A. Lopez and David Cortright

This study draws on lessons from 27 years of U.S. sanctions on Iran and research on what mix of carrots and sticks have resulted in past cases of denuclearization. It argues that the escalating crisis between Iran and the United States belongs on the bilateral summit table, not at the United Nations Security Council 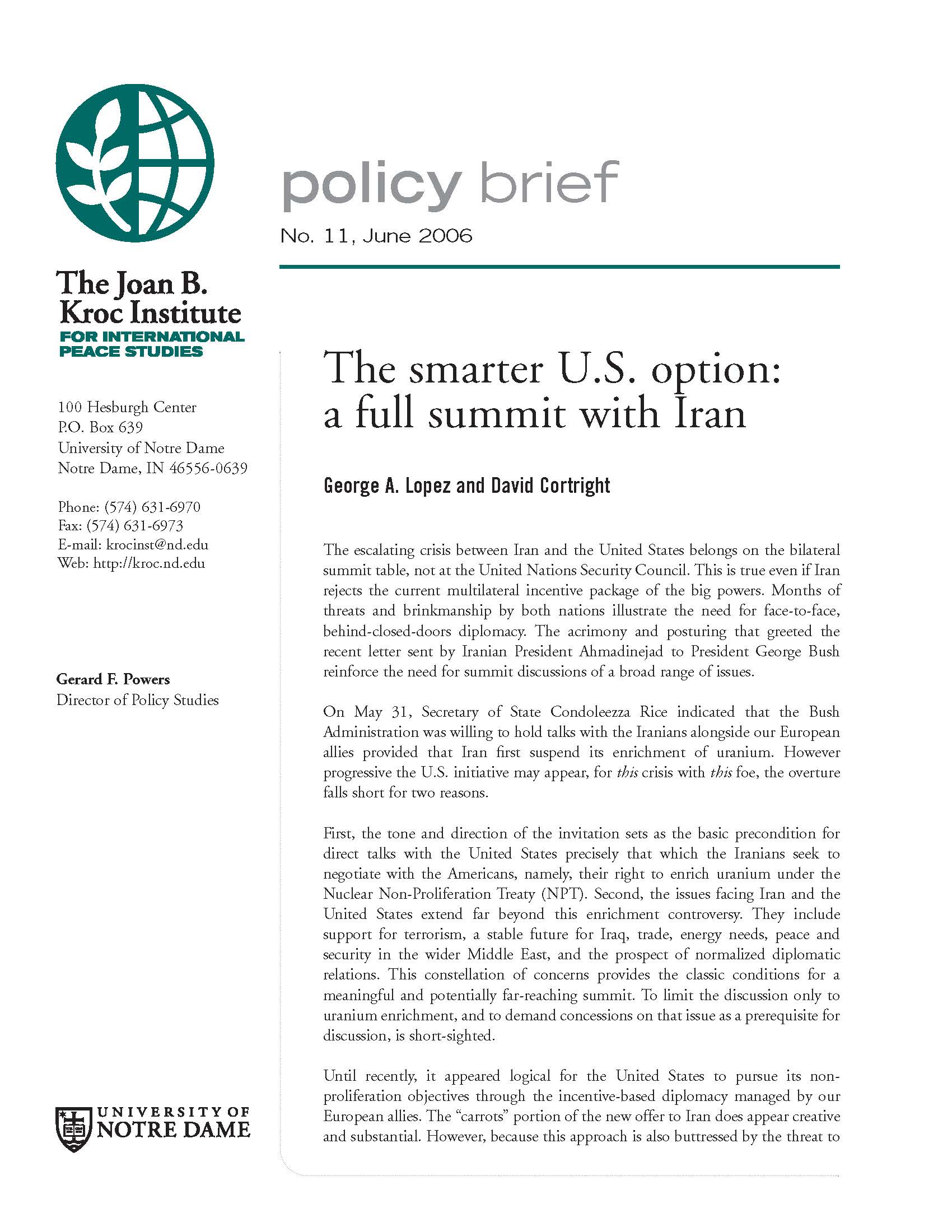 Mission Critical or Mission Creep? Issues to Consider for the Future of the UN Counter-Terrorism Committee and Its Executive Directorate

“The UN Security Council Counter-Terrorism Committee Executive Directorate (CTED) was established in 2004 with the core mission of supporting the Counter-Terrorism Committee (CTC) in monitoring the implementation of counterterrorism obligations required by Security Council Resolution 1373 and facilitating technical assistance to member states to aid their implementation activities. Since 2004, however, CTED’s mandate has expanded considerably in response to the evolution of the threat and the increased number of stakeholders benefiting from CTED assessments and analyses, a group that includes not only the council itself, but also UN member states in general, regional and functional organizations, and other counterterrorism-relevant entities inside and outside the UN system.” 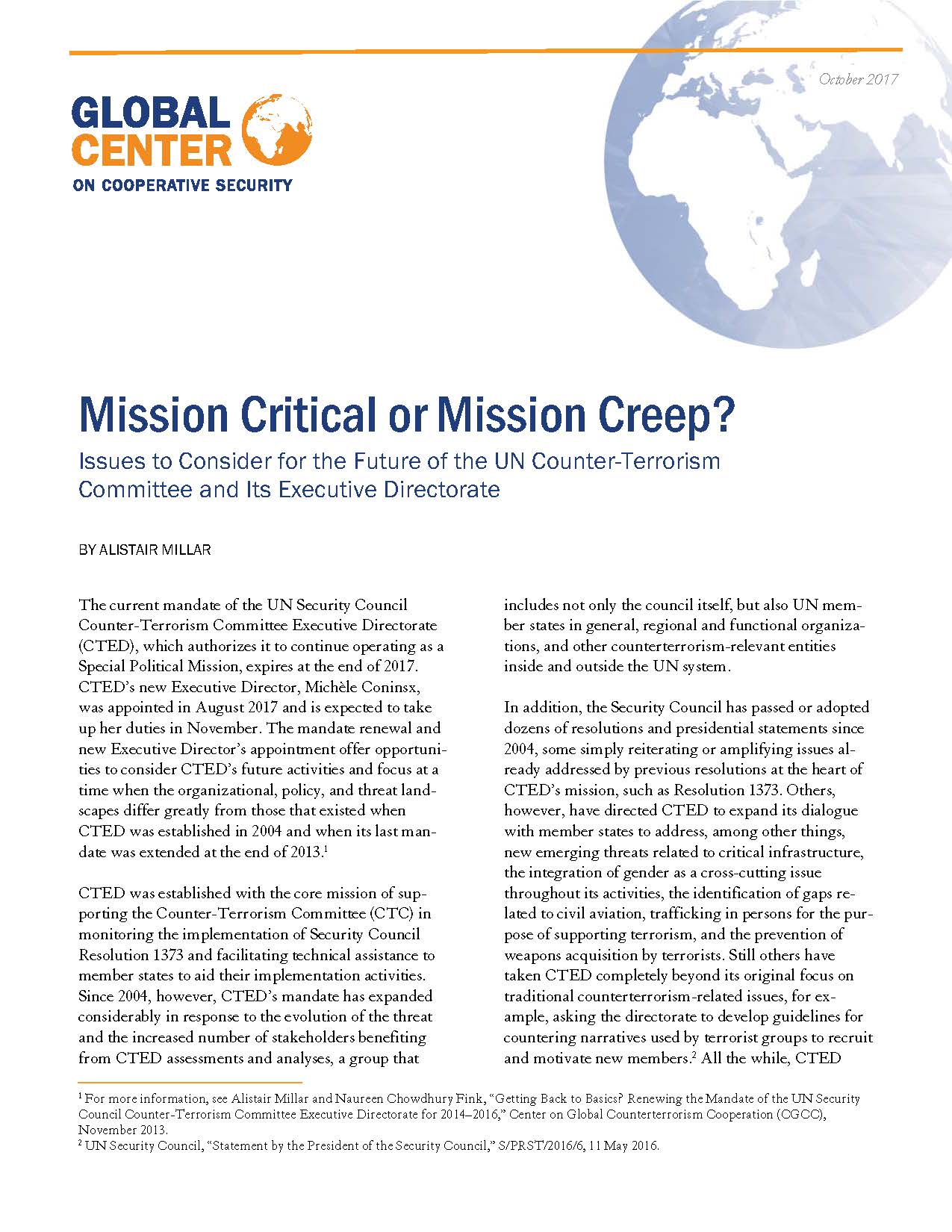 Getting Back to Basics?: Renewing the Mandate of the UN Security Council Counter-Terrorism Committee Executive Directorate for 2014-2016

The policy brief discusses the role of the Counter-Terrorism Executive Directorate (CTED) and the opportunities presented by the renewal of its mandate before the end of this year to further strengthen and clarify its role in the multilateral counterterrorism framework. It explores recent changes in the multilateral counterterrorism architecture, including the establishment of new entities within and outside the United Nations with a focus on countering terrorism and violent extremism. 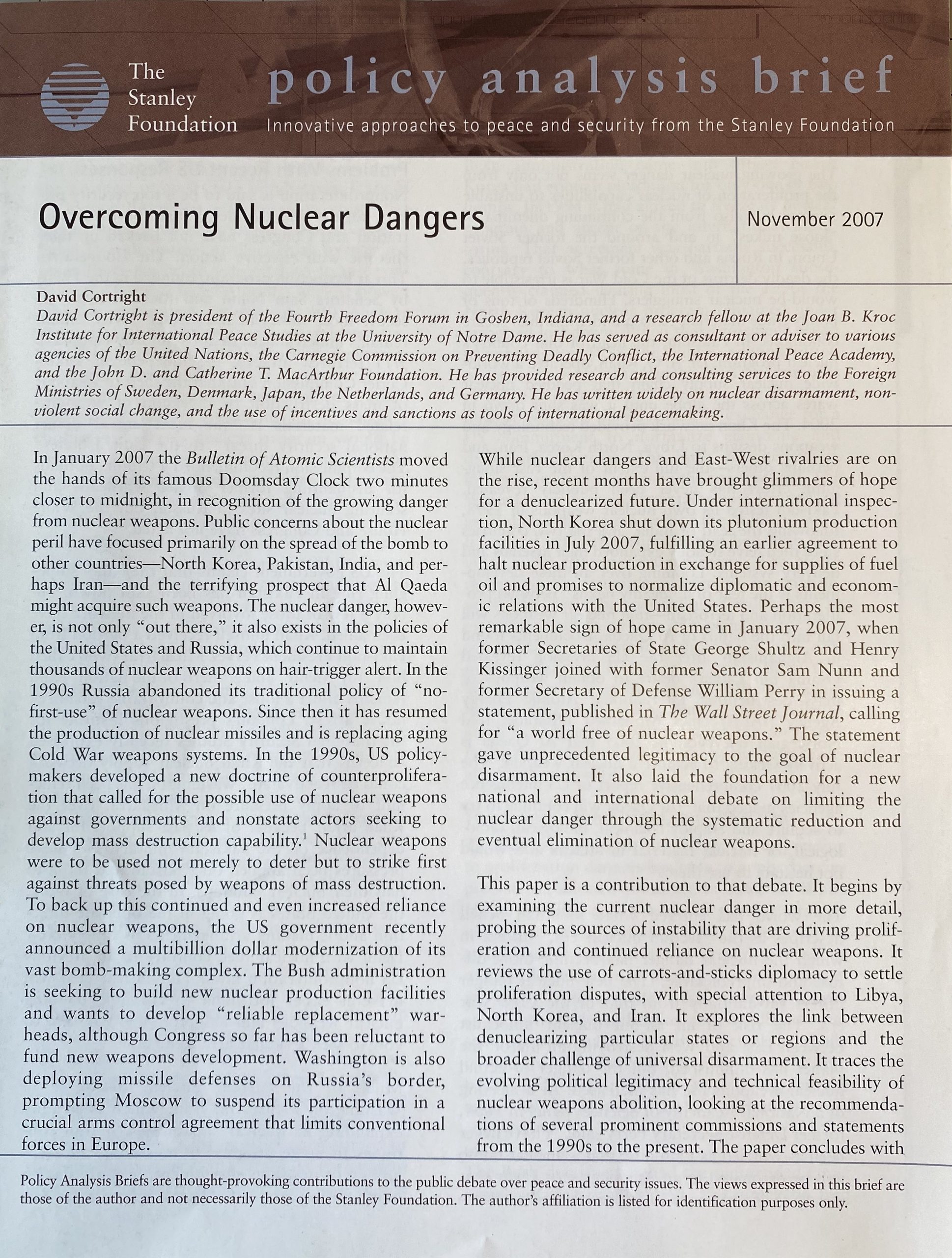 “Tactical Nuclear Weapons,” by Alistair Millar in NUPI Policy Briefs on the Implementation of the Treaty on the Non-Proliferation of Nuclear Weapons, Norwegian Institute of International Affairs, April 2005. 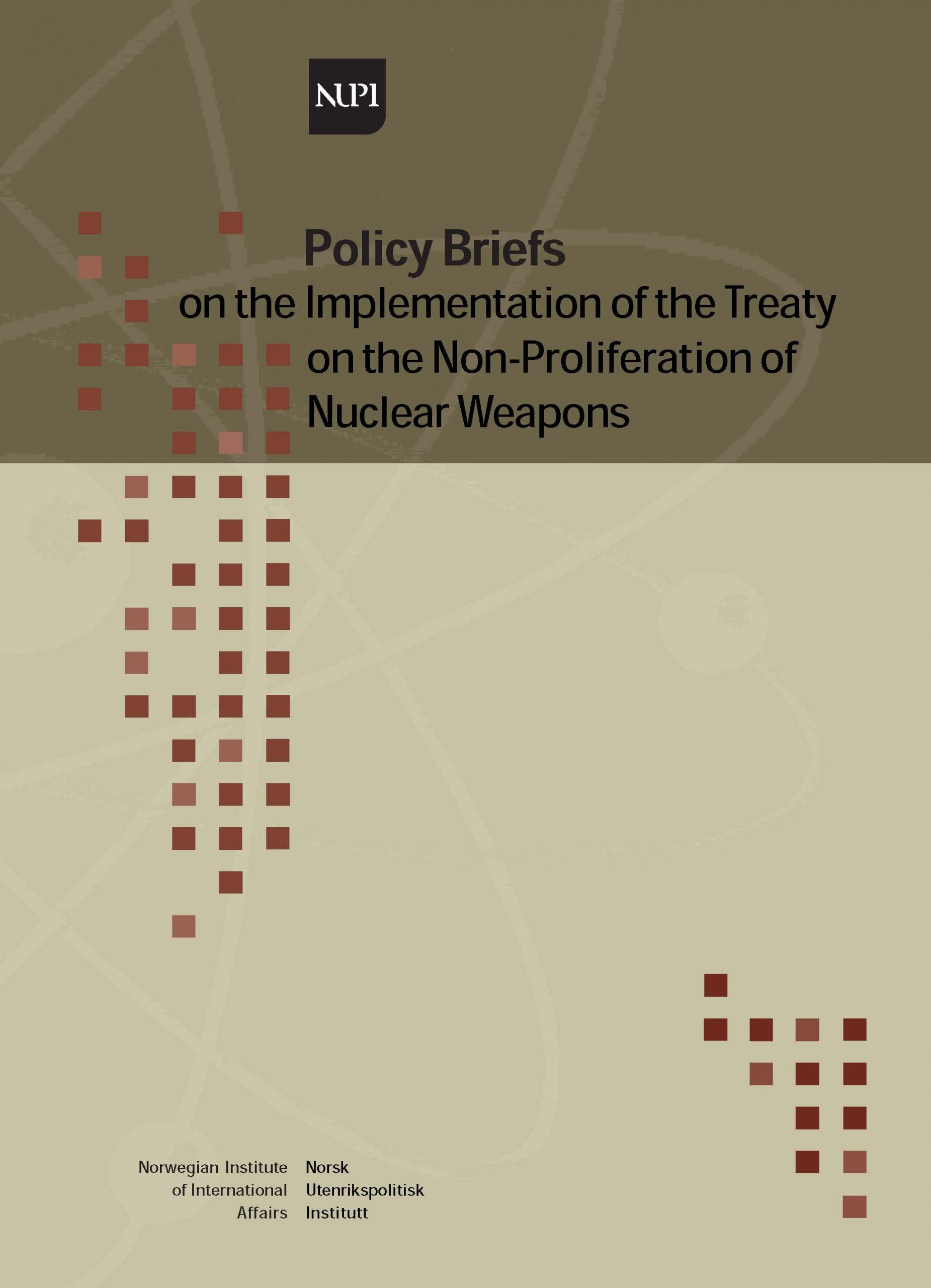 “Nuclear Non-Proliferation and the United Nations Security Council Resolution 1540,” by Alistair Millar and Morten Bremer Maerli in NUPI Policy Briefs on the Implementation of the Treaty on the Non-Proliferation of Nuclear Weapons, Norwegian Institute of International Affairs, April 2005.