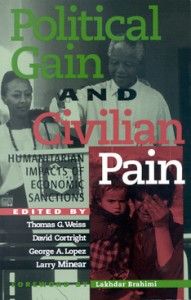 “Despite the diversity of sanctions episodes and their greater multilateral character, one dimension of sanctions policy remains unchanged. Conventional wisdom assumes that the imposition of economic coercion will exercise sufficient ‘bite’ that citizens in the targeted country will exert political pressure to force either a change in the behavior of the authorities or their removal altogether. Although analysts have long characterized this underlying assumption as naive, inflicting civilian pain in order to achieve political gain remains the modus operandi of sanctions policy.”